GREAT DRONE FOOTAGE is mesmerizing, no matter what it depicts. (Exhibit A: This video of a truck driving through mud in super-slow-motion.) But perfect shots—the swooping landscapes, the hovering overheads—are hard to come by. A new drone from 3D Robotics (a company co-founded by former WIRED editor-in-chief Chris Anderson) is the beginning of a project to make it a little easier.

The $1,000 Solo drone (or $1,400 with a GoPro-holding gimbal included) is full of clever tools to automate and simplify shooting. There’s even a one-click way to take an ultra-dramatic selfie video. But one of the most impressive features is that the drone will be sold as an open platform, allowing hackers to tinker with the hardware and software.

The Solo, which will be available in May, is designed to be ready to fly right out of the box. This quadcopter is 3.3 pounds, all black, and vaguely threatening; it looks more like a drone you’d want sneaking behind enemy lines than one you’d want delivering your burrito. It has a simple controller, which looks like an old-school video game joystick, with a holder for your iPhone or iPad, which act as both the monitor for the drone and the remote control for the mounted GoPro camera. There are lots of helpful tools for newbie pilots, like a panic button on the controller that will stop the drone in its tracks wherever you are, and a flight simulator app so you can learn to fly a drone without risking crashing $1,000 into a wall. (Repeatedly.) 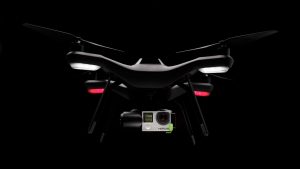 The Solo’s best feature, though, is its camera automation. In addition to the standard “follow me” mode, you can draw a line on your phone’s screen, and the Solo will fly back and forth along exactly that line while recording video. Pick an object and select “Orbit,” and the drone will fly a perfect circle, camera focused on your subject the whole time. And in selfie mode, the camera trains on you and flies away, epic-action-movie-style. You can control your GoPro settings in flight, too, which no other drone offers. The goal is for Solo to take great video without you doing much of anything, and then do even more as you get better. 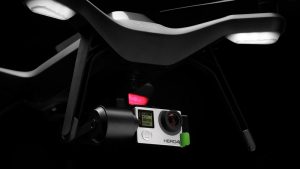 A lot of these first features are made so flying and shooting video will be a little easier. But the second phase for 3DR and the Solo is to open it up—the company sees Solo as a platform, and has opened up both hardware and software in hopes that developers will build specific apps, crazy tricks, and unique functionality into the two computers on board the drone. Or, they can drop new sensors or chips into the accessory bay and do even more. 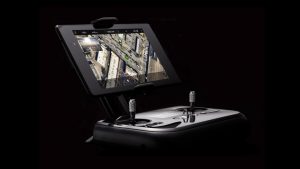 Drones are rapidly getting both more powerful and easier to master; DJI’s new Phantom 3, launched just last week, has a better camera, live-streaming capabilities, and a new positioning system that makes it much easier to fly. It’s also cheaper than the Solo, when you factor in a gimbal and a camera. But 3DR’s vision is bigger, and more open; it wants to be the Android of drones; extensible and customizable for purposes beyond even what it can conceive. And most of all, it wants to get everyone flying and shooting, because as anyone who’s flown a drone tells you, it’s hard not to get hooked.