In my earlier review of the Walkera QR X350 Pro, I had given my initial impressions of Walkera’s entry-level 350-size quadcopter. Most of it were good but that was nearly three months ago and since then I’ve had some really interesting experiences with it, culminating in a spectacular crash a few days ago which resulted in a ruined quad and close to $300 in damages.

Suffice to say, my experience of owning the X350 Pro has not been all rosy and although my initial impressions of it were generally good, three months of flying it has revealed flaws that were not obvious in the beginning.

For a start, the APM-based Devo M flight controller that comes with the X350 Pro appears to be a botched up version of the original APM by ArduPilot. My initial problems with the X350 Pro centered around its erratic flight behavior which usually happens after I tweaked around with some simple parameters in Mission Planner such as the RTL height. After hours of researching I found out that I wasn’t alone and that other X350 Pro owners have also experienced the same problems. 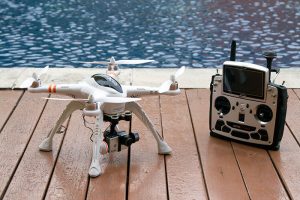 My X350 Pro during happier times. 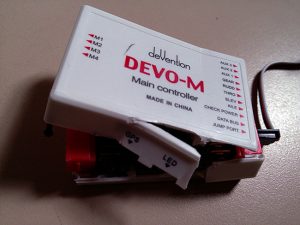 My badly damaged Devo M flight controller. The Devo M is the main culprit of many X350 Pro crashes apart from pilot error.

The general advice now for any X350 Pro owner is this — use Mission Planner only for waypoint navigation and nothing else, unless you are an ArduPilot developer and know exactly what you’re doing. Any attempt to tweak around with your quad’s parameters, even basic ones, will result in a X350 Pro that won’t fly properly. It seems the cause of this problem is how Walkera implemented the APM-based Devo M flight controller. Some APM features have either been locked or improperly tweaked around with, which means the Devo M flight controller does not behave like other flight controllers that make use of the APM Autopilot Suite.

Perhaps the most critical flaw in the X350 Pro is its Low Voltage Cutoff (LVC) feature which has been blamed by countless X350 Pro owners for causing their quads to crash or drop very fast from the air. Ironically, the LVC feature was intended to prevent damage by preventing batteries from over-discharging. Both the X350 and X350 Pro are known to crash due to issues with the LVC.

So how does the LVC cause crashes? When flying your X350 Pro, the voltage in your battery will occasionally drop to 10.75V or less. This is normal and usually last only a split second but when the flight controller detects this drop in voltage, it will attempt to cut off power to the motors in an attempt to save the battery from over-discharging. What happens when the LVC kicks in during a flight? You guessed that right — a plumetting X350 Pro.

In my case, I learnt my LVC lesson the hard way.

With that said, you might be wondering why did Walkera incorporate LVC in the X350 Pro anyway since it can potentially cause the quad to drop like a rock from high altitude. Surely, choosing to preserve the battery at the expense of destroying the entire quad just simply doesn’t make sense.

Well, LVC is a safety feature meant to save RC airplanes from crashing when battery power runs low. When a battery is depleted, power to both the propeller and steering servos gets cut off simultaneously, resulting in a crash. With LVC, the plane’s flight controller will shut off the propeller first in order to save some power for the steering servos. This allows the pilot to save the plane by performing a “dead-stick landing” — a type of forced landing when an aircraft loses all of its propulsive power and is forced to land.

In an RC airplane, LVC is intended to protect both the airplane and battery from damage. While LVC is an essential safety feature in RC airplanes, it simply has no place in a quadcopter which uses its propellers for both propulsion and steering. The APM AutoPilot was designed to be used by a variety of unmanned vehicles, including RC airplanes which rely on the LVC feature. Since the X350 makes use of the APM AutoPilot, someone at Walkera probably forgot to turn LVC off.

Due to this reason, X350s have been crashing so often that owners eventually found out the cause and fixed it themselves. It’s puzzling why Walkera hasn’t solved the LVC issue in the X350 Pro although the problem has been plaguing the line since the earlier X350.

However, if you’re a proud owner of a X350 Pro, it’s not the end of the world for your quad. As I mentioned just now, there is a DIY solution for disabling LVC. You can read about it at the RCGroups forum here. If you don’t have the time to read, this short video explains the LVC mod in about 5 minutes.

If you’ve just bought a new X350 Pro, my advice is never fly without disabling the LVC unless you enjoy seeing your quad do heart-stopping kamikaze dives. However, once you have disabled LVC, you will have no way of knowing how much power your battery has if you don’t have live telemetry readings from your quad when flying. Remember that draining your 11.1V 3-cell 5200mAh battery to 10V or less can cause some serious damage. An effective and affordable way to deal with this risk is to install a battery voltage checker with buzzer.

Another essential item to have when flying your X350 Pro is a stopwatch. Bear in mind that you may not always hear the buzzer on your voltage checker, especially when your quad is some distance away. This is why having a stopwatch or timer to time your flights is important. A X350 Pro without any extra payload has a flight time of about 25 minutes. A fully loaded X350 Pro with camera and gimbal will fly for about 15 minutes so having a timer will give you a rough idea when it is time to land before your battery gets damaged from being over-discharged.

My X350 Pro’s epic crash from 60m in the air resulted in a badly mangled G-2D gimbal. This wasn’t surprising since it landed on hard tarmac. The impact had caused the Devo M flight controller to be pancaked, apart from crushing the plastic body like an egg shell and causing damage to various other parts such as the power distribution board and landing skids. Surprisingly, the iLook+ camera survived the crash intact with only a small dent at the bottom. I had installed a lens protector which got shattered but managed to protect the front element of the lens from scratches or getting cracked. The iLook+ is still capable of taking videos (and transmitting video), still photos and audio and record them on a memory card. Kudos to Walkera for building such a sturdy camera.

Without the LVC issue and botched implementation of the APM AutoPilot, the X350 Pro is actually a nice and reliable quadcopter to own and fly. It’s a shame that Walkera had to ship the X350 Pro with these critical flaws and leaving Walkera fans to fend for themselves. With such flaws, the X350 Pro is certainly in no position to challenge the DJI Phantom 2 which is known to be more reliable. Disabling the LVC and installing a voltage checker in their products shouldn’t be a costly move but exactly why Walkera hasn’t done this with the X350 Pro is simply beyond my understanding. 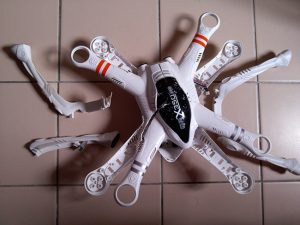 What’s left of my X350 Pro’s plastic body. I plan to salvage the usable parts to build a 250-size quad soon.

I hope Walkera has been listening to the problems faced by X350 Pro owners and will not repeat the same mistakes on the upcoming X350 Ultimate which is due to be released soon. If you already own a X350 Pro or plan to get one soon, there is no reason to panic or cancel your order. Just remember to disable the LVC and not mess around with parameters in Mission Planner and your X350 Pro will fly just fine.