3D Robotics has launched its DroneKit open-source Application Program Interface (API) which is intended to help simplify the writing of drone apps. DroneKit can be used to program drones that use the APM flight controller by ArduPilot, giving developers the ability to write a wide range of web-based drone apps, smartphone apps as well as apps that run in drones.

Without an API such as DroneKit, developers can still manipulate a flight controller but the process is a lot more complicated and requires a deep understanding of programming. Using an open-source API makes the whole process a lot faster and easier.

With DroneKit, developers can program drones to fly waypoint navigation, follow a GPS target, manipulate camera gimbal systems and transmit flight telemetry. Developers can also log a drone’s flight data and view it later for analysis. 3D Robotics — the largest US-based drone manufacturer, expects DroneKit to be used in a wide variety of applications from agriculture to aerial photography. Besides multirotor drones, the API will also work for planes, boats and other autonomous vehicles that make use of the popular APM autopilot. 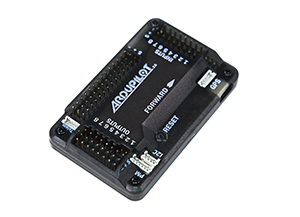 DroneKit will leverage on the features of ArduPilot’s popular APM flight controllers.