When shopping for a drone, you will inevitably reach a stage where you have to decide on what type of camera gimbal to choose from. Drones with camera gimbal systems typically come with 2-axis or 3-axis brushless gimbals and which type of gimbal you choose depends on what you plan to use it for. 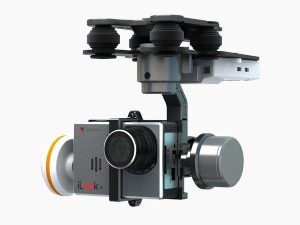 However, 3-axis gimbals are heavier and more expensive than their 2-axis counterparts. They also draw more battery power due to having more motors. To illustrate this point, Walkera’s G-3D gimbal (3-axis) is about 48g heavier and costs roughly $50 more than its 2-axis sibling.

Helipal.com has an excellent video that demonstrates the differences between the DJI H3-2D (2-axis) and H3-3D (3-axis) gimbals. Both gimbals had GoPros installed and were attached to two different Phantom quadcopters which were attached to a larger hexacopter. The hexacopter was then flown in different flying conditions to show the differences in video quality from the two gimbals.

For Filmmakers and Aerial Photographers

Besides providing better video stability, 3-axis gimbals are excellent if you have a separate operator for your camera. When flying with two operators, two radio transmitters are used — one for piloting the drone and the other strictly for controlling the camera. With a 3-axis gimbal, the camera operator can freely pan the camera without having the pilot to pan the drone. This cannot be done when a 2-axis gimbal is used which requires the pilot to pan the drone in order to move the camera angle along the yaw axis.

It is also important to note that 2-axis gimbals can perform as well as their 3-axis counterparts when it comes to taking still images. The only thing that really sets these two gimbals apart are videos. So if you focus strictly on taking still images from the air and hardly do any videos, a 2-axis gimbal will do just fine especially when you have a tight budget.

For the FPV Enthusiast

If you want to fly your drone in first-person-view (FPV) for the sheer fun of flying, you will want to choose a 2-axis gimbal which provides 2 advantages due to its lighter weight — longer flight times and a more agile drone. The heavier your drone, the less agile it becomes so every gram you put on your drone counts. There is no doubt a 2-axis gimbal makes for a lighter drone than a heavier 3-axis gimbal.

Although 2-axis gimbals tend to produce more horizontal shake in your video feed, it is not significant enough to affect your flying. Generally speaking, FPV enthusiasts prefer to fly without any gimbal, mounting the camera directly onto the frame. This setup allows for a far more agile drone but if you must have a gimbal when flying FPV then go for a 2-axis gimbal.
The Yuneec Q500 Typhoon has one of the best 3-axis camera gimbal system for a quadcopter kit below $2,000 (photo by Yuneec).

For All Those in Between

A 3-axis gimbal is the ideal choice if you’re planning to do a little bit of both. It provides excellent video stabilization when you’re out shooting videos for professional use and is not too bad if you’re flying your drone just for thrills. Just remember to bring extra batteries along as a 3-axis gimbal can drain your battery slightly faster than a 2-axis gimbal.