What happens when you inject the Syma X5C-1 with steroids? You get the X5SC-1, the latest model in Syma’s highly popular X5 lineup. The new X5SC-1 has some improvements over its predecessor and comes in two other variants — the X5S which is the non-camera version and the more advanced X5SW which sports a camera that transmits FPV (First-Person View) video over Wifi.

So what has changed in the new X5SC-1? To begin with, the legs have grown longer, the body has undergone some redesign, the motors are slightly bigger now and Headless Mode has been thrown in. What remains the same are the 3.7V 500mAh LiPo battery, propellers, HD camera and transmitter body (although there are some subtle changes to the transmitter’s function which I will discuss later).

Is the X5SC-1 a better overall deal than its predecessor? This is a tough question to answer and to find out why, read further. 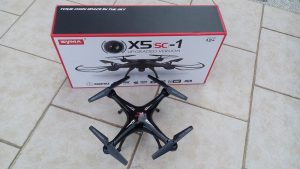 Syma undoubtedly put in a lot of effort in trying to make the X5SC-1 better than the earlier X5C-1. This can be seen in the many changes done to the design of the body. Unlike its predecessor, the new quad features enclosed pinion gears and motors which provide sufficient protection for the motors from strands of hair or nylon which can cause some serious damage. This can happen when a strand of hair gets caught up in the motor or pinion gear forcing the motor to stop when current is still being channeled into it causing the motor to burn on the inside. Enclosing the motors and gears can help prevent this from happening.

The camera mount is new too, allowing the user to securely slide the camera in and out. No screws are necessary for removing or installing the camera. This is a nice improvement over the X5C-1’s camera which was attached to a flimsy battery door via two tiny screws. Removing the X5C-1’s camera out in the field without the right screwdriver would be impossible. Speaking of battery doors, the X5SC-1’s battery door faces the rear and is a lot more sturdy, easier to use and better designed compared to its predecessor’s. Another nice touch is the beefier power switch that is now located at the bottom of the body.

The taller landing legs are also another big improvement and helps prevent the camera from getting too close to rough surfaces when landing. If you’re always landing on thick wet grass or rough surfaces with plenty of rocks or other hard objects that could knock into your camera, the taller landing legs are certainly a nice thing to have. The new body also features other tiny details such as redesigned vents and graphics.

Black is the new white for quadcopters. It simply looks meaner and badder.

The X5SC-1 is also available either in black or white.
Flight Performance

The X5SC-1 comes with larger 8mm motors compared to its predecessor’s smaller 7mm ones which gives it a lot more grunt. It is significantly louder and a lot more brutish as well. Despite all that extra power, the X5SC-1’s flight performance is a mixed bag of sorts.

For a start, it seems to have lost a little bit of that smoothness the X5C-1 is famous for. The X5SC-1 simply feels a little bit more rough in how it flies. However, the worst thing about its flight performance is not the slight roughness but rather its inability to fly against light winds — infamously known as the “wind bug”. This happens when you attempt to fly the X5SC-1 against winds of about 5 to 10km/h. The quad will simply refuse to fly into the wind, tilting in the direction of the wind and remains mostly stationary almost as if it lacks the power to move forward.

This wind bug problem is not an issue of having motors that are not powerful enough to propel the X5SC-1 into light winds because even the X5C-1 with smaller motors is still capable of flying into winds with similar force, albeit at slower speeds. What many believe is that the problem probably lies in some software bug in the X5SC-1’s flight controller which gets confused when the quad is being flown against slight winds.

Despite this problem, the X5SC-1 is still an impressively stable quadcopter to fly. Hovering is easy and it is highly responsive, particularly when flown indoors. This makes the X5SC-1 an ideal choice for beginners and also experienced pilots looking for a cheap trainer drone to keep their flying skills sharp.

The Turnigy Nano-Tech 750mAh 35C is a good option and can boost flight time up significantly. One thing to remember if you decide to purchase the Nano-Tech 750mAh is that the battery’s connector is in reverse polarity to the one on the X5SC-1. To use this battery on the X5SC-1, you need to reverse the polarity of its connector. Failure to do this will result in permanent damage to the circuit board.

Flight speeds on the X5SC-1 come in two modes — High and Low. Low speed mode makes the quad easier to control and is ideal for beginners and especially if you’re flying in tight indoor spaces. If you’re looking for a bit of excitement, then switch to high speed mode and watch the X5SC-1 zip around at a faster rate.

The X5SC-1 also does the usual aerial stunts such as 360 degree flips.

One important feature that differentiates the X5SC-1 from its predecessor is the “Headless Mode” function which has become highly popular among beginner pilots. Headless Mode allows the operator to move the quad in any direction relative to the transmitter, irrespective of where the front or “head” of the quad is facing. This is especially useful for pilots who tend to lose orientation of their quads easily which often results in crashes.

The X5SC-1 comes with the same 2MP / HD 720P camera used by its predecessor. Being a sub-$100 quadcopter, the camera is nothing to shout about. However, for its price, it takes some pretty decent videos and photos. If you’re looking for a cheap quadcopter to inspect your roof, get an aerial view of your crops or to simply have a different visual perspective of your neighborhood, then the X5SC-1 won’t disappoint.

The X5C-1 is famous for having a badly designed battery door which is also used to attach its camera. It is a relief that Syma has decided to do away with this bad design. The X5SC-1’s camera is mounted simply by sliding it in. No tools are needed for mounting.

The X5SC-1 transmitter won’t win any awards when it comes to aesthetics, looking like a gadget from a 1980s sci-fi movie. However, it does its job well enough. The spring-loaded control sticks are a nice touch and a small LCD screen at the bottom displays information such as battery level, trim levels, yaw rate, throttle level, etc. On the left and right of the LCD display are some gimmicky “buttons” that don’t do anything.

The transmitter is powered by 4 AA batteries (not included) and has a control range of about 50 to 80m. Some enthusiasts have come up with hacks to extend the transmitter range well over 80m.

Like its predecessor the X5C-1, the X5SC-1 is a quadcopter that is remarkably stable and a lot of fun to fly. However, the X5SC-1 seems to lack the smoothness that the X5C-1 is famous for and has a somewhat rough characteristic in its flight. The most glaring flaw in the X5SC-1 is its inability to fly into slight winds — a strange characteristic that probably stems from a software bug in its flight controller. It is also a lot louder and feels more brutish thanks to its larger motors.

Despite these flaws, the X5SC-1 features plenty of improvements over the X5C-1 and this can be mostly seen in its redesigned body which includes a very well-designed battery compartment and camera mount. Its taller landing legs also help keep the camera away from getting scraped by hard surfaces or objects when landing.

If you can forgive it for its wind bug problem and its slightly rough flying characteristic, the X5SC-1 is actually a much better toy-grade quadcopter than its predecessor which costs slightly less.